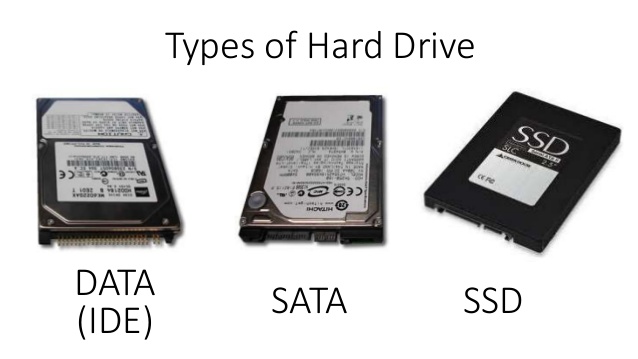 Hard Drives are one of the most fundamental forms of data storage and processing. They were first introduced in 1956 by the company, IBM. Over these years, they have witnessed many technological advances. HDDs are connected to systems by standard interface cables such as PATA (Parallel ATA), SATA (Serial ATA), USB or SAS (Serial Attached SCSI) cables.

There are four types of hard drives at present . They are

PATA stands for Parallel Advanced Technology Attachment which is a bus interface used for connecting secondary storage devices like hard disks. This was first developed by Western Digital. They are also known as integrated drive electronics (IDE). This became the basis for modern hard drive construction. In recent years, the PATA interface has been slowly disappearing.

SCSI is a standard interface for connecting peripheral devices to a PC. It allow computers to communicate with peripheral hardware such as disk drives, tape , CD-ROM , printers and scanners faster and more flexibly than previous parallel data transfer interfaces. Although not all devices support all levels of SCSI, SCSI standards are generally backward-compatible.

SSD is one of the latest types of hard drives. Unlike SATA ,SSD stores data in integrated circuits. Since SSD don’t have moving parts not only they’re more reliable but also more shock-resistant . SSD’s are much faster and offer instant-load performance. SSD became very common in laptops now. With the same storage space, the cost of SSD is three to four times that of SATA hard drives